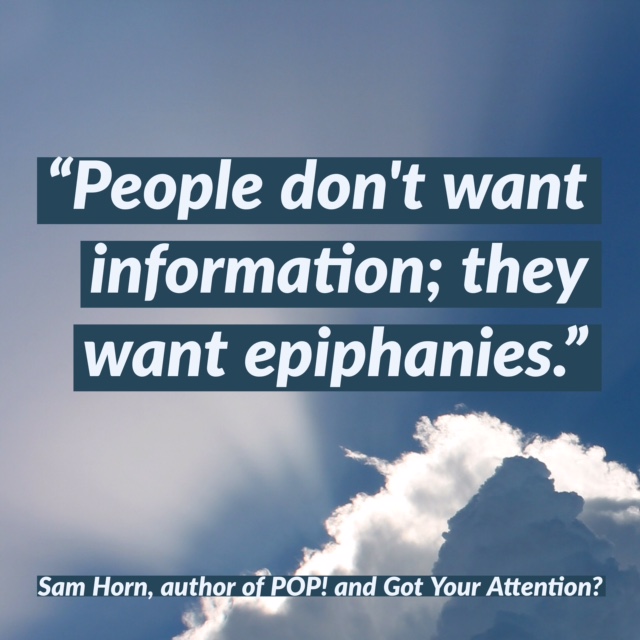 I was working with a client on her TEDx talk and she was telling me about the information she wanted to get across. I told her that TED talks are NOT about dispensing information; they’re about facilitating epiphanies. What is the SHIFT people are going to make as a result of her presentation? What will they be motivated to change or do differently as a result of her insights?

How about you? Where will you be giving a presentation, making a request, proposing an idea or teaching someone this week?

Imagine you’ve been asked to speak to college grads about how to land a job. You could start with a laundry list of your credentials; however, they probably read your bio in the program brochure, so that’s a waste of their time.

You could jump right into your how-to instructions on how to craft better resumes and job applications, but that doesn’t engage an audience because it’s still a one-way lecture, and chances are they’ve heard or read those tips before.

A better way to EARN people’s favorable attention is to create a DIALOGUE by introducing something startlingly relevant … in the first 60 seconds. The goal is to get everyone’s eyebrows up by asking if they’re aware of these surprising insights about the issue you’re addressing. The goal is for them to be thinking, “Really?! I had no idea it was that bad, that much, that little. For example:

Did you know that:

* 53.6% of bachelor degree holders under 25 are jobless or under-employed?

Imagine if you could:

* Find out about quality jobs that are never advertised?

* Increase the likelihood of getting a job interview this week?

* Discover 7 unique yet proven ways to stand out from the crowd and give yourself a competitive edge in today’s crowded job market?

You don’t have to imagine it. You’ll discover how to do all the above in our time together, and you’ll hear true success stories of grads just like you who had almost given up but instead landed their dream job as a result of using these techniques.

Isn’t that more interesting and engaging than simply giving people an overview of what you’re going to cover?

What’s a situation you’ve got coming up where you’ll be teaching someone, proposing something, or giving a report? You could start out with a predictable opening and lose them at hello – or you could pleasantly surprise them by starting with something that gets their eyebrows up (a sure sign of curiosity). Here’s how you can do the latter.

1. Open with 3 questions that introduce startling statistics or facts your listeners don’t know – but would like to know – about the:

* Scope of the problem you’re solving.

* Urgency of the issue you’re addressing.

* Dramatic shift in the trend or topic you’re discussing.

Are you thinking, “Where do I find these startling statistics or surprising facts?

You GTS – GOOGLE THAT STUFF. Just enter the following questions into your favorite search engine:

* What is recent research about _____ (the problem you’re solving?)

* What is startling news about _____ (the issue you’re addressing?)

Up will come insights and studies even YOU didn’t know about. And if you’re an expert, and this info gets your eyebrows up (a sure sign of curiosity) it’s likely to get your audience’s eyebrows up too.

2. Use the word IMAGINE linked with 3 aspects/benefits of your program that everyone in your audience would find appealing.

* The word IMAGINE causes people to picture your point and see what you’re saying. They’re now fully engaged instead of thinking about what they’re going to have for lunch.

* By verbally painting the ideal scenario your program delvers; everyone is on the edge of their mental seat eager to hear more because they’re thinking, “Sounds good. Who wouldn’t want that?!”

3. Say, “You don’t have to imagine it…” and then offer real-world evidence showing how your program has already produced tangible results so audience members know this isn’t “too good to be true;” they can trust it (and you) because it has a successful track record and has helped people just like them get the results they want.

Best yet, all the above can be condensed into a succinct 60 second opening.

While other presenters are still telling their audience what they’re going to tell them (aka blah-blah-blah INFObesity) – you’ve already set up a two-way dialogue by asking and engaging instead of telling and selling. You’re earned everyone’s favorable attention because you’ve facilitating epiphanies vs. delivering information. Everyone in the room is smarter than they were a moment before … which means they’ll want to keep listening because you just proved you’ll be worth their valuable time, mind and dime.

Want more ways to craft intros that have people at hello? Watch this TEDx talk which both models and teaches my 60 second approach to openings. You also might want to check out this related article which shows why NEVER to give an elevator speech.

Sam Horn is on a mission to help people create more compelling, collaborative communications that add value for all involved. Her TEDx talk and books – including POP!, Tongue Fu!, IDEApreneur and Washington Post bestseller Got Your Attention? – have been featured in New York Times, Forbes, INC and Fast Company and presented to NASA, Accenture, ASAE and National Geographic. Want Sam to present at your next convention? Contact Cheri@IntrigueAggency.com