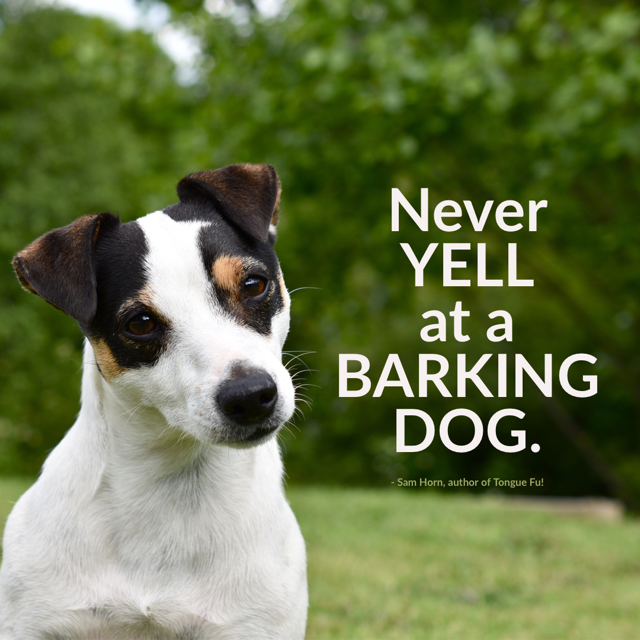 When we lived in Maui, I signed our energetic Jack Russell up for dog obedience training. At our first session, JR was so excited to see all his new buddies, he wouldn’t stop barking.

So, what did I do? I yelled at him to stop barking.

(Yes, I know how ridiculous that was.)

The instructor came over and gently suggested, “It doesn’t do any good to yell at a barking dog. He just thinks, ‘Great, now we’re both barking.’ The goal is to stay calm and model the behavior you want him to follow.”

This was a metaphor waiting to happen.

I shared that example in a Tongue Fu! for Customer Service workshop I gave the next day.

A manager named Jim laughed, “I can’t wait to share this in our next employee orientation.”

“We’re really short staffed at our hotel. We’ve had to put a policy in place that housekeeping is only by request. As you can imagine, our guests are unhappy about this and some take their frustration out on our front desk staff. I’m going to remind our team members it may be tempting to yell back at someone who’s yelling at us, but it just makes things worse.”

Can you relate? Are you in customer service? Do people sometimes take their anger out on you? If so, these tips might come in handy.

1.  Follow Gandhi’s advice and “Be the change you wish to see.”

Our goal is to direct our behavior instead of reflecting other people’s behavior.

One way to do this is to clarify how we want to show up – no matter what.

What is a word that articulates who and how you want to be?

Repeat that to yourself whenever someone is not treating you with the respect you deserve.

Keeping your mantra top-of-mind can help you continue to be the quality of person you want to be – even when other people aren’t.

If someone’s shouting at you, it can be tempting to shout back. But that results in a shouting match which isn’t a win for anyone.

As Ruth Bader Ginsburg said, “Reacting in annoyance will not advance one’s ability to persuade.”

The best way to persuade someone to lower their voice is to lower yours.

When you speak in a modulated, measured tone, people are more likely to respond in kind.

They will often quiet down because you’re setting the tone instead of reacting to theirs.

Some assertiveness courses suggest you use the word I as in “I don’t like being yelled at.” That can backfire because upset customers are likely to fire back, “Well, I don’t like having a dirty room.”

Using the word YOU as in “You need to calm down” can also backfire because telling someone what to do is a surefire way to rile them up.

It’s better to use WE so people feel we’re in this together and on the same side instead of side against side.

Saying, “If we get creative, we can figure this out” is more likely to elicit cooperation instead of exacerbating a conflict.

4. Plant the seed for the desired behavior vs. the dreaded behavior.

Telling someone to stop doing something as in “Stop interrupting me” has the exact opposite effect of what was intended because repeating a negative emotion reinforces it.

You’ll get better results if you ask for what you do want vs. what you don’t.

Imagine you’re on an airplane that has a mechanical issue and the pilot says, “I know this is upsetting, but we’re going to have to return to the terminal.”

This is likely to make you feel more upset. And if you weren’t upset before, you are now.

Brian Tracy says, “Never say anything to yourself you don’t want to come true.”

It’s also smart to never say anything to others you don’t want to come true.

Imagine if the pilot got on the intercom with, “Thank you for your patience. We will give you an update as soon as we receive one. Please know we appreciate your understanding.”

Feel the difference? We are more likely to feel whatever emotion seed was planted.

Please note: I’m not saying that keeping your cool and being a class act is always easy.

I am saying it’s worth it.

So, how will you put this into practice?

From now on, if someone starts taking their anger out on you, remember you have a choice.

You can react and get upset – or you can be the change you wish to see.

What’s it going to be?

Subscribe to Sam’s LinkedIn Newsletter to get notified of new articles.