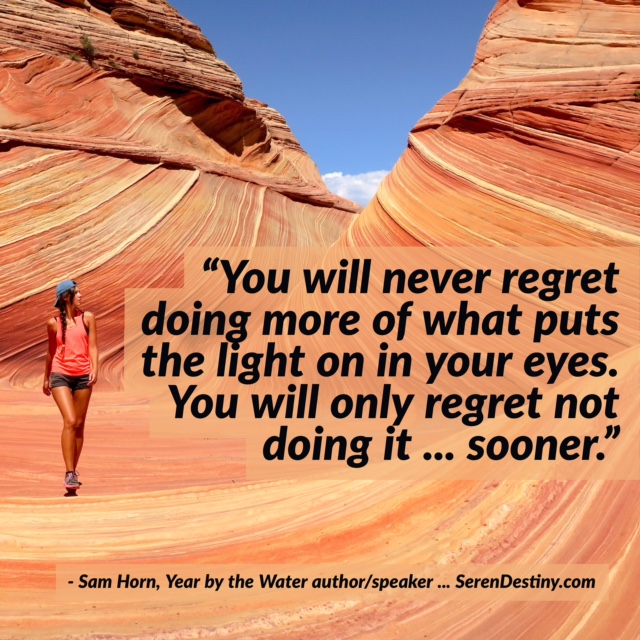 I recently spoke for a national convention on the topic of “Is the Light On In Your Eyes?”  I started by saying many of us spend more time reflecting on what movie to watch this weekend than on what we’re going to do with the rest of our life.

Many of the audience members had been running their business for 10-30 years. Many work long hours and haven’t taken a vacation for years because they have so many people counting on them.

Some are ready to retire, but don’t know what they can do NEXT that is as satisfying and productive as what they’re currently doing. Some don’t have a succession plan in place and don’t want to see the business they built go down the drain.

I shared a quiz to help them figure out in 4 minutes what’s working in their life, what’s not, and what’s missing.

One of the ideas we talked about is how to integrate our passion into our profession.” Many people told me they don’t have time to what they used to love to do because they’re too busy. I told them, they can COMBINE what puts the light on in their eyes with their CAREER – instead of seeing them as being mutually exclusive.

Here’s what I mean.

Several years ago, I had the pleasure of sharing breakfast with Ivan Misner, founder of BNI, the largest networking organization in the world. After hearing about my full calendar of speaking, consulting and traveling, he asked, “What do you do for fun?”

Long pause. I finally dug deep and came up with “I walk my dog around the lake.”

Please don’t get me wrong. I love what I do. I am grateful to have the opportunity to do work that makes a positive difference … it’s just that I was going 24/7.

That conversation and several other wake-up calls motivated me to set out on a Year by the Water. I didn’t abandon my business … I just took it on the road. As James Taylor said when he took a break from touring for a year to compose new lyrics and produce a new album; “I didn’t quit work – I did a different kind of work.”

What I’ve learned along the way disrupted everything I thought I knew about what true success and being a good person looks like: I discovered:

* we don’t have to be torn between two worlds – we can have the best of both worlds.

* it’s not always better to give than to receive

* to create the quality of life we deserve, we need to stop watering dead plants

* it’s not selfish to put yourself in your own story

* waiting is a prescription for regrets

* someday is not a day in the week

* we don’t have to put aside what puts the light on in our eyes – we can integrate it into our daily life in a way that makes us even more balanced and blessed.

Want an example of what I mean?

When I lived on Maui, I played tennis with Kathy, a 4.5  player and Realtor. Then, the economy slumped and she quit tennis because she was so busy finding clients.

I suggested her hobby wasn’t an indulgence – it was a competitive edge. I suggested she approach the concierges at the Four Seasons and Grand Wailea Resort (both 5 diamond properties catering to affluent travelers – Kathy’s target demographic) and offer to play tennis with guests looking for a good game of singles. They started recommended her because she’d lived on the island for years, was a respected member of the community, and they trusted her to make this a good experience for their guests.

This turned into a win for everyone. Within a month, Kathy was back to playing tennis 3-5 times a week AND had several new clients buying houses. She didn’t offend anyone with hard selling. It was natural while sharing an iced-tea after a satisfying match, guests would ask “What do you do?” When they discovered she was a Realtor, they often ask if she had any properties of interest. Not only was Kathy back to being outside doing what put the light on in her eyes – it became an organic marketing tool that kept her visible and became her secret sauce to success in a down market.

Want to figure out how you can do more of what puts the light on in your eyes?

Check out my SerenDestiny site where I share posts on what a meaningful life looks and feels like for me and for dozens of people I’ve interviewed for my upcoming book Chase Meaning Not Clicks.  Hope you find these quotes, stories and insight inspiring and they help you create a more fulfilling life now … not someday.