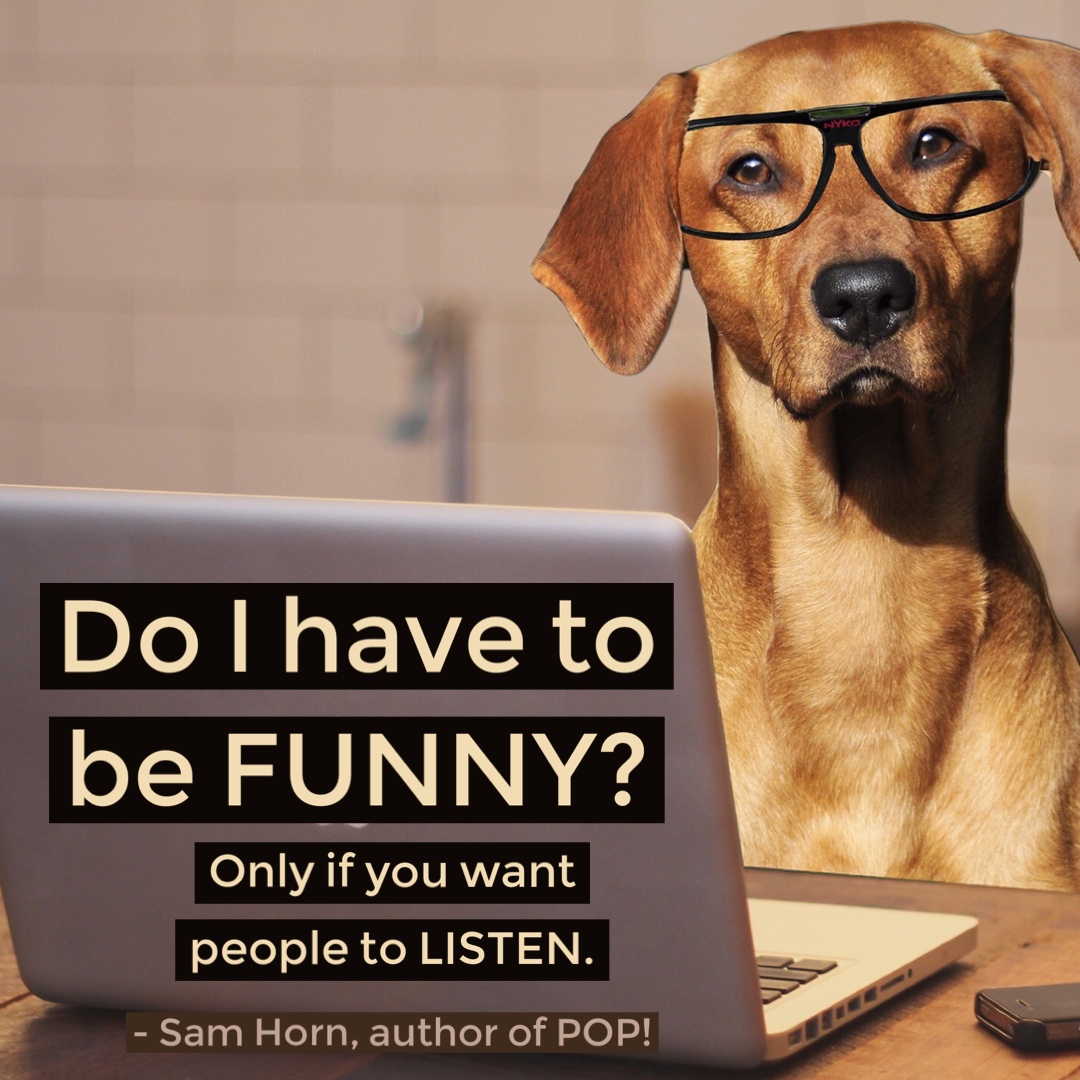 “Laughter is the closest distance between two people.” – Victor Borge

A client preparing a TEDx talk told me, “I know humor is important, but I’m not funny. Every time I try to tell a joke, it falls flat. ”

I told him, “That’s why I suggest you DON’T tell jokes. They often come across as forced or false … which causes you to lose your audience. Plus, jokes are ‘made up.’ At some level people are thinking, ‘If you’re making this up, what else are you making up?’ They don’t know whether they can trust you.

The good news is, we all have amusing things happen to us or around us. All you have to notice what makes you laugh that’s relevant to your topic and integrate that TRUE HUMOR into your talk.”

He said, “But I’m speaking on a serious subject. I don’t want to alienate my audience.”

Here’s a story I use in my Tongue Fu!® talks that lightens the mood after discussing ‘dark’ topics such as how to handle bullies, complainers, gossips, blamers and shamers.

“I was in the San Francisco airport heading to my gate on one of those long moving sidewalks. A very tall man was walking the opposite direction. I couldn’t believe it. The people in front of me were pointing at him and laughing. I thought, ‘How rude, there’s no excuse for that.’

When he got closer, I could see why they were laughing. He had on a t-shirt that said in very large letters, “No, I’m NOT a basketball player.”

As he went by, I turned to say something and burst out laughing. The back of his shirt said, “Are you a jockey?”

I had to meet this clever young man so I ran back to catch up with him. I asked, “Where’d you get this terrific shirt?”

“My mom made it for me. I grew a foot between the time I was 16 and 18 years old. I didn’t even want to go outside because everyone had to make a smart aleck remark. My mom told me, ‘If you can’t beat ’em, join ’em.’ I’ve got a whole drawer full of these shirts at home. My favorite one says, ‘I’m 6′ 13″ and the weather up here is fine.’”

“This is so smart. You are a walking-talking model of Fun Fu!”

“It’s based on something humorist Erma Bombeck said, ‘ If you can laugh at it, you can live with it.”

“I can relate to that.  I used to get so annoyed when people brought this up. These shirts have made all the difference. Now I have fun with my height instead of being frustrated by it.”

My client said, “Okay, that’s a fun story. But how do you tie it back into your topic so it’s relevant?”

“Good question. It’s crucial to ‘hook and hinge’ the punch-line of our anecdote back to our point so people understand how it relates to them. The ‘hook’ is the punchline of your story and the ‘hinge” is 1-3 ‘You’ questions.

For example, I might say, ‘Is there something that annoys you? Would you like to have fun with it instead of be frustrated by it? Would you like to brainstorm some comebacks so people no longer have the power to push that hot button?’

By integrating key words from the story into ‘you questions,’ people are now thinking how they can adapt and apply that to their own situation. That’s how to integrate humor so it’s purposeful for everyone in the room, instead of trotting out a joke that falls flat.”

My client asked, “Can I use this technique to make what I write funnier?”

“Absolutely. A friend, Denise Brosseau, spent months working on her Ready to Be a Thought Leader? manuscript. When doing the final proof, she realized it was packed with useful information, but was a bit too serious and wasn’t sure how to lighten it up.

I asked, “What has happened to or around you in the past few months that’s make you laugh out loud that is in some way related to the content in your chapters?”

Bingo. Denise thought of several funny anecdotes, including this, one of my favorites.

Denise was shopping for a shower gift at a Babies ‘R’ Us store near Stanford U. While waiting in the check-out line, a couple in front of her debated the complicated instructions on the crib they were about to buy which had to be assembled from scratch. They nervously asked the cashier, “Will we be able to put this together ourselves?”

The cashier asked innocently, “Do you have college degrees?”

The cashier smiled and said, “Then you’re going to need to hire someone.”

Bada boom. Denise told me, “The cashier’s response was so unexpected, everyone in the area, including me, cracked up. I weave that story into my presentations and it always gets a big laugh. More importantly, it supports my point that advanced degrees can add value, but they’re not required to be a thought leader in your industry.”

Denise is right. Unexpected responses elicit laughs. Do you know how Einstein knew he had a good idea? He laughed out loud.

Erma Bombeck said, “If we can laugh at it, we can live with it.” It doesn’t have to elicit a huge guffaw to be funny. If it elicits a smile that changes a perspective, that causes us to reflect on shared human foibles we all can relate to, that qualifies as “gentle humor.”

From now on, when something unexpected causes you to smile or laugh, write it down. Then, figure out how you can integrate it (and attribute it) into an upcoming communication to give people some comic relief from the “serious stuff.”

Want to see how to integrate humor into a presentation? Many managers tell me they show my TEDx talk at meetings because employees like watching it.  Why? I used a tip from Pretty Woman Director Garry Marshall who told our Maui Writers Conference audience that screenwriters deliberately put a laugh in the first couple minutes of their scrip because they know, “Laugh early, laugh often.”

Research shows that when people laugh in the first few minutes of a film, presentation or book, they conclude it’s funny. They warm to it, decide it will be a good use of their time and attention, and are more likely to laugh from then on.  As Victor Borge points out at the beginning of this post, laughter IS the closest distance between people.

When you watch this TEDx talk, notice the Carrie Fisher (from Star Wars) quote, how it gets a laugh, how I hook and hinge it to the topic, and how it “sets the tone” so we’re off and running … all in the first minute.

Are you going to be giving a TED or TEDX talk, speaking at a conference, business meeting or networking event? Is your message “serious?” If so, how will you win people’s favorable attention with true humor that motivates people to like you and give you and your message a chance? And here’s what NOT to do in the first sixty seconds.

Sam Horn, Intrigue Expert and TEDx speaker, helps people create communications that add value for all involved. Her work – including Tongue Fu!, POP! and Washington Post bestseller Got Your Attention? – has been featured in New York Times on on NPR and presented to Nationwide, Capital One, YPO, NASA, Cisco, Intel. Want Sam to share her fun and inspiring keynote with your group? Contact Cheri@IntrigueAgency.com. 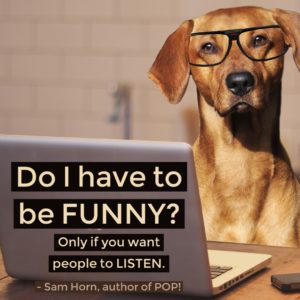