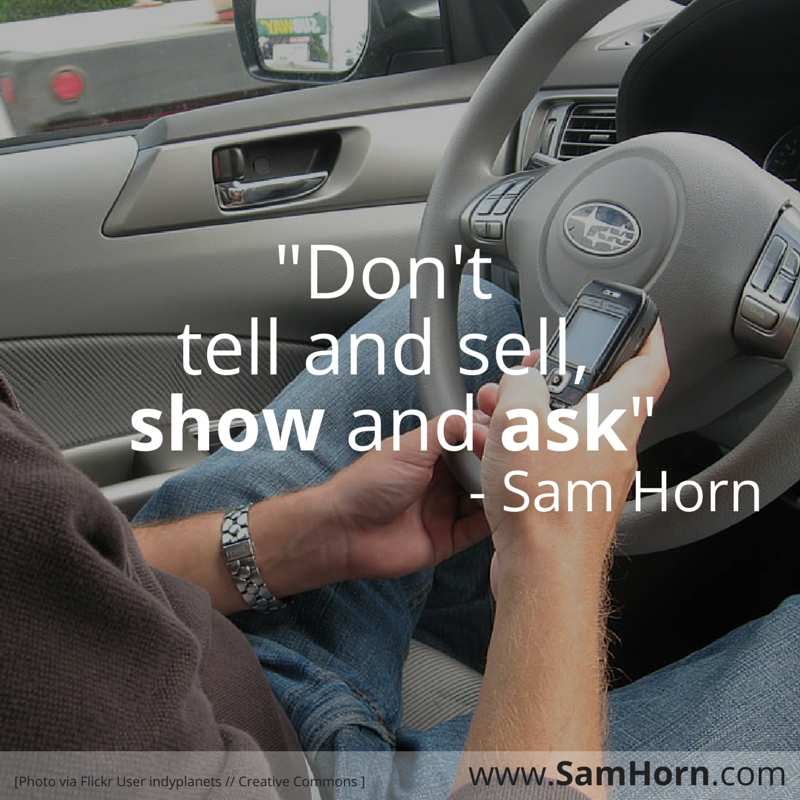 “You had my curiosity, but now you have my attention.”

– line from the movie Django Unchained

Many of us grew up doing “Show and Tell” in elementary school.

A premise of INTRIGUE is, “It’s smarter to ask than tell. And it’s even smarter to show and ask.”

Why? Showing and asking verbally and visually engages people. It’s a way to create curiosity and get people’s favorable attention.

Entrepreneur Cari Carter is a shining example of this.

Cari was participating in a pitch competition sponsored by Springboard Enterprises (https://sb.co/) at the California Women’s Conference.

Springboard calls their competition The Dolphin Tank, (because it’s a kinder version of the TV show Shark Tank where entrepreneurs pitch their startup to a panel of investors to win funding.)

As a judge, I had an opportunity to review Cari’s business plan in advance. She had created a hook, called Cargo, you put in your car to hang your purse on.

I thought, “Really?! You’re building a business around a hook that holds a purse?”

However, Cari intrigued us in the first minute. She carted a full size car seat to the front of the room, set it down on the floor next to her and put a purse on it. She stood up, faced the group, wrapped her fingers around an imaginary steering wheel and started “driving” while saying:

“Have you ever been driving along and you had to STOP all of a sudden?

Your cell phone falls off the passenger seat onto the floor. You’re scrabbling around trying to retrieve it with one hand while driving and trying to stay on the road with the other hand?

Imagine never having to worry about that again. Imagine having a hook that you …”

At this point, a man in the audience stood up and said, “I’ll take two. One for my wife and one for my daughter.”

Wow. Cari went from a skeptical “Really?!” to an enthusiastic “I’ll take two” in sixty seconds. That’s the power of showing and asking.

Cari did several smart things that contributed to her creating curiosity and getting our attention.

She asked instead of told. Have you been taught to start communications by telling people what you’re going to tell them, telling them, and then telling them what you told them? That’s terrible advice. Do you know anyone who likes being told what to do?

It’s more engaging to ask “Have you ever …?” questions that involve people instead of inform them. Now they feel like you’re talking with them instead of at them.

She “made us look” by using a prop. I’m sure it was a hassle to haul that car seat into the Long Beach Convention Center. However, it was worth it because it gave us something interesting to look at. Cari must have known our attention is where our eyes are. If we’re not looking at a speaker, we’re probably not listening to that speaker. Instead of being another “talking head,” Cari had our attention before she even said hello.

Cari acted out a situation we’ve all experienced. Instead of describing her startup with an elevator pitch (boring), she demonstrated a real-life situation where something went wrong. We remembered a time that happened to us or a loved one, and voluntarily decided we wanted her product so we can prevent that from happening again. She wasn’t selling, she was showing.

Bill Gates said, “I believe that if you show people the problems and you show them the solutions, they will be moved to act.”

I agree. Next time you want people’s attention, don’t “tell and sell” your product or service, “show and ask.”

Act out a frustrating situation with a prop while asking “Have you ever…?” questions.

It is a more effective way to win buy-in because people will think, “Been there, done that, don’t want to do it again.” People will be more motivated to act when you act out the problem.

You’ll know you’ve succeeded when people say, “That just happened to me last week,” “I want/need that!” or “You’re talking to me!”

Those responses are a sure sign you’ve connected, and mutually-rewarding connections are the goal of every communication.