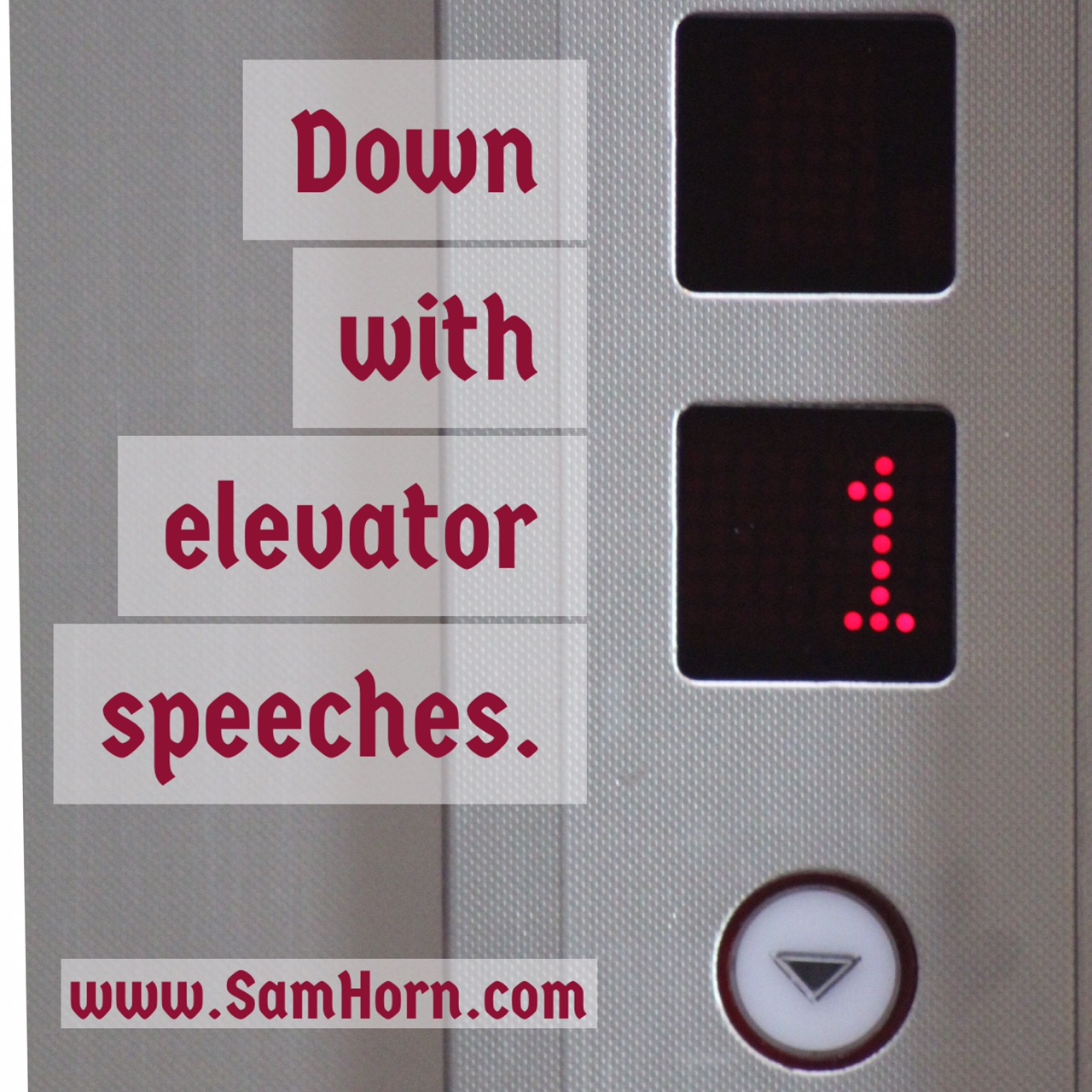 “Enough about me.  What do you think about me?” – Bette Midler in the movie Beaches

While speaking at an INC 500 event, I introduced a new approach for replacing elevator SPEECHES with elevator CONNECTIONS. An entrepreneur named Colleen raised her hand and said, “I can’t figure out how to do this for my business.”

I asked what she normally said when meeting people. She started explaining her job, using technical terms like magnetic resonance imaging and computed tomography. None of us had any idea what she did.

I asked, “Want to brainstorm a better way to answer the ‘What do you do?’ question.”  She said a heartfelt “YES.”

“Okay, from now on, instead of EXPLAINING what you do (which is kind of like trying to explain electricity), focus on the real-world results of what you do that people can see or may have experienced.  What are those?“

“That’s better already because we can mentally picture what you’re talking about. It’s no longer conceptual or highly technical.  Plus, we probably know someone who has had an MRI or CT scan so now we can relate to it.

But don’t stop there. If you TELL people what you do, they’ll go, ‘Oh,’ and that’ll be the end of the conversation. We don’t want to CLOSE conversations, we want to OPEN conversations. You can do by asking a three-person question.”

“What’s this about a three-person question?”

“If you ask, ‘Have YOU ever had an MRI?’ and this person hasn’t, the conversation comes to an awkward dead-end. If you ask, ‘‘Have you, a friend, or a family member ever had an MRI?’ you just increased the likelihood they’ll know someone who is familiar with what you and your organization offers.”

She said, “Why is it so important to use the same words they used? I don’t want to parrot them.”

“Good point. I’m not suggesting we repeat what they said word for word. I’m suggesting we use a few of the same words because common language is what connects two strangers who, a moment ago, didn’t know if they had anything in common.”

She thanked me, sighed and said, “I wish someone had taught me this years ago.  I can’t wait to get back to work and share this with my staff.”

How about you?  What do YOU say when people ask, “What do you do?” What do your employees and team members say?

Think about it. Whether we like it or not, wherever we go, the people we meet will ask “What do you do?” And what we say MATTERS.

That CEO’s inability to answer that question at the INC 500 conference could have meant millions of dollars in lost opportunity costs. She was surrounded by highly successful entrepreneurs, all in a position to partner with her, refer business to her or use her services. But that wasn’t going to happen because they didn’t know what she did – which meant they didn’t value it and wouldn’t remember it.

Many people tell me they hate this question, for a variety of reasons. They don’t know how to answer it. They feel it pigeon-holes them and they don’t want to be defined by their job. They’re out of work. Or, they don’t have a position or profession people respect. Some tell me they dread “networking” because it means being subjected to a series of long-winded, boring, confusing elevator speeches.

I tell them, it can be helpful to realize that when people ask “What do you do?”, they’re not really trying to find out what you do; they’re trying to connect. They’re trying to identify what you have in common you both care about so they have a hook on which to hang a mutually-interesting conversation.

Which is why it’s so important to stop TELLING people what you do. An elevator speech is a monologue delivered in the presence of witnesses. A scripted, rehearsed-to-death elevator speech borders on being offensive because it’s a one-way lecture. Instead, next time someone asks what you do, you might want to say, “I’d be happy to talk about what I do, and first may I find out more about you?” By giving other people an opportunity to go first, you’ve not only set a precedent that you’re genuinely interested in them and it’s not going to be “me, me, me;”  you’re sure to discover something relevant you can use to customize your opening so it reflects and integrates what you already know about them.

When it’s your turn, remember, instead of launching into an explanation, ASK a three-person question that gives the other person an opportunity to share how they – or someone they know – have experienced or benefitted from what you do.

Truly listen to their response, and then link what you do to what they just said.

Voila.  You’ve just created a two-way conversation (dialogue vs. a monologue) that is a lot more likely to lead to a mutually-meaningful CONNECTION.  Furthermore, you’re also acting as an eloquent ambassador for your profession because the people you meet will have new-found appreciation for the work you do and the positive difference it makes for so many.

Want to see how this is done?  Watch this TEDx talk and share it at your next staff meeting. Be sure to have paper and pen or your laptop ready so you can take notes on how to adapt this approach to upcoming, real-life situations.

The first example in the TEDx talk shows how to introduce your idea or organization in a business setting where you’re trying to win buy-in, support, a green light or funding from decision-makers. The difference is,  by ASKING (a dialogue) instead of TELLING or SELLING (a monologue); you’re genuinely engaging people instead of lecturing them with INFObesity.

The second example in the TEDx talk shows how to introduce yourself at networking events or conferences when you’re meeting people for the first time.

Hope you find this approach and short video useful, and they help you genuinely enjoy meeting people and create more mutually-rewarding connections that benefit all involved.

Sam Horn, Founder/CEO of the Intrigue Agency, helps people create intriguing respectful, collaborative communications and projects that scale their influence – for good. Her work – including POP!, Tongue Fu! ConZentrate and Sam Horn’s Washington Post bestseller Got Your Attention? How to Create Intrigue and Connect with Anyone – has been featured in New York Times, Fast Company, Forbes and on NPR.  Her inspiring, interactive presentations receive raves from Intel, Cisco, NASA, National Geographic and Capital One. Contact Cheri Grimm at 805 528-4351if you’d like to arrange for Sam to speak at your convention or train your team.