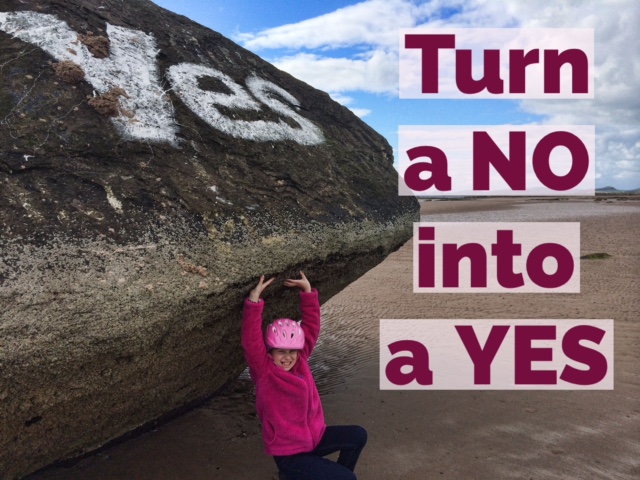 “If you stick to what you know; you’ll sell yourself short.” – singer Carrie Underwood

If you stick to what you know … you’ll get a no. Instead, ask yourself, “Why will my decision-makers say no?” and say it first.

If you don’t, they won’t be listening; they’ll be waiting for their turn to talk so they can tell you why what you’re requesting/recommending won’t work.

Here’s an example of someone who did this brilliantly.

Several years ago I went to BIF – Business Innovation Factory – in Providence, RI for a fascinating couple of days with leading-edge innovators from around the world, (e.g.,  Tony Hsieh of Zappos and Alan Webber of Fast Company).

The most impressive speaker was a surprise. She walked to the center of the stage and waited until everyone was quiet. Then, with a big smile, she leaned out to the group and said …

“I know what you’re thinking. What’s a 13-year-old going to teach me about innovation?”

She paused for a moment, and with a twinkle in her eye said, “We 13-year-olds know a thing or two … like how to flip our hair.”

Why? She read their mind.  She realized these global thought-leaders might be a wee bit skeptical that a 7th grader would have anything to teach them. She anticipated those objections and brought them up first. In doing so, she turned their resistance into receptivity.

By the way, Cassandra continued to earn our respect by describing how she and her fellow 7th graders had taken a field trip to the sewers of Providence and discovered they were filled to bursting with F.O.G. – Fat, Oil and Grease.

Cassandra thought, “Somebody’s got to DO something about this.”  She realized SHE was as much a somebody as anybody, so she and her classmates founded T.G.I.F. – Turn Grease into Fuel. Every Saturday, they collect F.O.G from restaurants and industrial parks, recycle it and donate the money they receive to needy families. Go Cassandra.

Want to Turn Resistance into Receptivity?

“Let’s address the elephant in the room. ‘YO ELEPHANT!'” – Gene Weingarten

When and where will you be making a request or recommendation?

Want to increase your likelihood of success?

Ask yourself, “Why will my decision-makers say, “You’ve got to be kidding?!”

Ask, “What’s the elephant in the room?” and address it … first. If you’re chairing a meeting at 4:30 on a Friday afternoon, anticipate that everyone will be wondering how long this will take and will have one mental foot out the door.

Say, “I can only imagine you’re thinking about rush hour traffic. I promise you we’ll wrap up in twenty minutes so you can be out of here before 5 pm.”  That will pleasantly surprise everyone and help win buy-in.

Perhaps you’re proposing an expensive program and anticipate your boss will be sitting there with his mental arms crossed thinking, “We don’t have any money in our budget for this.”

Start off by saying, “You may be thinking we don’t have any money in our budget for this. If I can have your attention for the next three minutes, I’ll point out where we can find that money, how we’ll make it back in the first three months, and turn it into profits from then on.”

Imagine you’re suggesting a new membership recruitment program to your association board. You predict push-back because a similar program failed last year.

Open with, “You may be thinking we tried this before and it didn’t work. You’re right, and I’ve identified three mistakes we made last time and have ways to prevent those from happening again this time.”

Are you pitching a book to an agent or editor and predict they might reject it because there are a LOT of books in your genre on this topic?

Lead with, “You may be thinking this is a crowded gene. You’re right. That’s why I introduce a contrarian, first-of-its-kind approach people haven’t seen before that has produced proven, bottom-line results. Several top experts in our industry are ready to endorse the book and have committed to buying several thousand copies for their companies upon publication.”

THAT will get their attention:-)

Remember, if you don’t voice nay-sayers’ objections, they won’t be listening; they’ll be waiting for you to stop talking so they can tell you why this won’t work.

If you want to INTRIUGE decision-makers and win their favorable attention; start with with WHY they might say NO, bridge with the word AND (not but), and then ask for three minutes of their time so you can show how what you’re suggesting will be a win for them.

This can help you turn a NO into a YES … sometimes in 60 seconds or less.

Want more ways to turn resistance into receptivity and get a YES to your ideas, products, services, company and cause?  Click here.