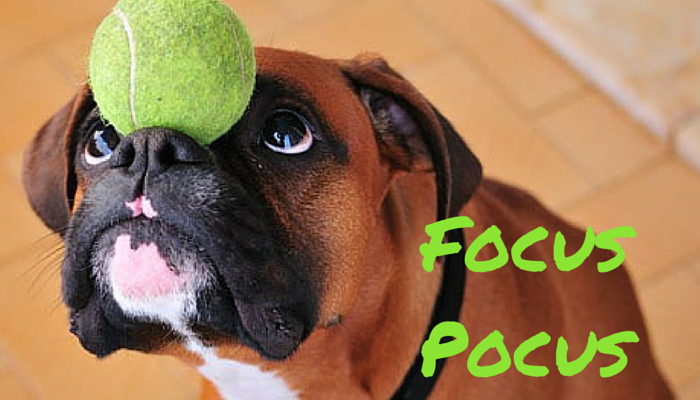 5 Magical Ways to Focus and Flow When It Matters Most

“I think the one lesson I’ve learned is there is no substitute for paying attention.” – news anchor Dianne Sawyer

Are you thinking, “I agree, but how can I focus when I’m busy, tired, overwhelmed or uninterested?”

These five Focus Pocus tips can help you concentrate on command — whether you’re writing a blog, trying to answer emails, or working in a noisy office.

There are two kinds of people — those who have learned how to work through frustration, and those who wish they had. – Warren Reed

From now on, if you’re working on something and tempted to give up — just do FIVE MORE.  Write five more paragraphs. Reply to five more emails. Work for five more minutes.

Do you get confused because you’re thinking of too many things at once?  Do you have ADHD and your mind bounces from one thing to the next?

You can overcome distractions and perpetual preoccupation with a technique bestselling author Frank McCourt (of Angela’s Ashes) used.

Frank was a keynoter at the Maui Writer’s Conference.  As Emcee, I walked the beach early each morning to practice my introductions for the day. One morning, I saw Frank writing away on two high-school composition notebooks (you know, the kind with the squiggly black lines?).

I normally wouldn’t interrupt someone clearly in a state of flow, but I was curious and thought he wouldn’t mind as long as I kept it short. I asked, “Frank, one question, and then I promise to get out of your hair.  What are you doing?”

Frank explained that his grand-daughter had visited their home, and woke up very early one morning – so he got up with her. He said, “She was in a fugue-like state, speaking incredibly imaginatively about the dream she’d had.  I realized we’re often most creative when we’re dreaming, so I promised myself I’d always write first thing in the morning to capture that vivid language and imagery.

But then, he said, I’d get distracted.  I’d think something like, ‘It’s Malachy’s birthday, I have to give him a call’ and I’d lose my train of thought.  So, I started keeping this second notebook nearby. If I’m in a state of flow and something off-topic occurs to me, I write it down so (and here he said something profound) … I’m free to forget it.”

Do your other “to-do’s” distract you and pull you out of a delightful state of flow?

From now on, keep a second notebook (or for the digitally savvy, Evernote on your digital device) nearby.  When you think of something off-topic, write it down so you are free to forget it and you can get right back in the flow of thinks.

My parents always told me I wouldn’t amount to anything because I procrastinated so much.  I told them, ‘Just you wait.’” – comedian Judy Tenuta

That’s a form of procrastination. Next time you’re about to postpone something, ask yourself the following:

Answering these three questions can give you the incentive to focus now because they bring you face to face with the fact that you DO have to do this task. If you don’t, then your problem isn’t procrastination, it’s figuring out whether you really want/need to do this in the 1st place.

This task isn’t going away. Delaying will only cause this to cause more grief or guilt and take up more of your mind and time.

U = Use Pavlovian Rituals

Does the name Pavlov ring a bell?” – Sam Horn

Do you have a ritualistic “bell” that signals to you it’s time to get to work?

Use this “hands as blinkers” ritual I introduced in my ConZentrate book to teach yourself to concentrate on command.

Here’s how it works:

First, it’s important to understand that your attention is where your eyes are. From now on, picture your mind as a camera and your eyes are its aperture.

Most of the time, your eyes and brain are in “wide-angle focus.” You are looking at and thinking about many things at once.

You can operate fairly efficiently in this wide-angle lens mode.  For example, you can safely drive down a crowded highway while talking to your kids in the back seat, keeping an eye on the cars around you, and watching for your exit sign. You can work at your desk while noticing co-workers walking by and thinking about the staff meeting that’s coming up in a half hour.

But what if you’re on a tight deadline and need to fully focus on getting something finished now?

What if you can’t afford to be distracted because you’re doing something highly detailed that needs your 100% concentration?

You need to switch your mind and eyes from “wide-angle” to “telephoto” lens.

To do this, use your hands as blinkers. Place them on the side of your face to shut out your surroundings.  Visual distractions are now, literally and figuratively, out of sight, out of mind.

Try it. Next time your eyes and mind are all over the place, give yourself tunnel vision and a one-track mind with your “blinkers” ritual.

That which can be done at any time rarely gets done at all.” –t-shirt saying

You’ve heard of Parkinson’s Law?  A task expands to the time allowed for it?

Horn’s Law is, “Focus evaporates when there’s too much time allowed for it.”

In my book ConZentrate, I define focus as “the ability to give our mind an order, and make it obey.”

Most of the time we can’t focus – what I call “mind mutiny” – it’s because we:

Saying, “I really need to pay bills” doesn’t mention when or where. Mental orders must include a “when” and “where” to be clear.

Saying “I’m going to pay the bills, clean the house, do the laundry, mow the lawn and then fix the fence,” overtaxes our mind.  And when our mind is overwhelmed, it is immobilized.

Saying, “I know I’ve got to pay bills but it’s so boring, and the electric bill is going to be high because of the heat wave” is commentary, not an order to the mind to focus and finish something now.

From now on, give your mind a specific start time and end time, and make it tight so you’re “forced to focus.”

As author Rita Mae Brown says, “A deadline is negative inspiration.  Still, it’s better than no inspiration at all.”

Use these five focus-pocus tips to make your mind …. mind.  Your finished work will thank you.

Sam Horn, author of ConZentrate, POP! and Got Your Attention?, is a communication strategist and TEDx speaker who helps people finish what they start and create one-of-a-kind books, businesses, presentations, and pitches that add value for all involved.  www.SamHorn.com