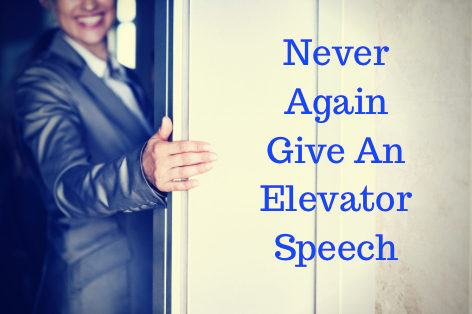 “It’s not about you. It never was.” – actress Diane Keaton.

That’s why, from now on when someone asks, “What do you do?” never again TELL them.  What?! Here’s an example to show what I mean.

Years ago, I was on a speaking tour with my sons. We had a night free in Denver, so we went downstairs to ask the concierge, “What do you suggest?”

He must have known that trying to explain it would only confuse us. Instead, he asked a qualifying question, “Have you ever been to Chuck E. Cheese?”

Why did that work so well? He turned a one-way elevator speech into a two-way elevator connection.  Here’s an example of how you can do the same.

A man approached me before a presentation and said, “I’m going to tell you something I haven’t told many people. I’m an introvert. I go to conferences all the time, but then I hide out in my hotel room because I hate networking.”

“I’m uncomfortable with small talk. Plus, I work in tech. I can never explain what I do in a way people can understand it. It’s so awkward, I rather just avoid it.”

I asked, “Want a way to introduce yourself that isn’t confusing or awkward, and that can actually lead to a meaningful conversation?”

I asked, “Don’t tell to explain what you do. That’s like trying to explain electricity.  Instead, describe the real-world results of what you do that we can see, smell, taste and touch.”

He thought about it for a moment and said something about credit cards, online retailers, financial software and computers. The light bulb went off in my mind. “Do you make the software that makes it safe for us to buy stuff online?”

“Because if you explain, ‘I make the software that makes it safe for you to buy things online, they’ll go, ‘Oh,’ and that’ll be the end of the conversation.

“Ask a three-part question that gives people an opportunity to share how they – or someone they know – may have experienced what you do.”

“What’s this about a three part question?”

“If you ask, ‘Have YOU ever bought anything online,’ and they say ‘No,’ you just ran into a conversation cul de sac.

If you ask, ‘Have you, a friend or a family member ever bought anything online … like on eBay, Travelocity or Amazon?’ you just increased the odds they’ve benefitted from what you do or know someone who has.

They may say, ‘Well, I never shop online. But my wife’s on Amazon all the time. She loves the free shipping.’

Now, link what you do to what they just said, ‘Well, our company makes the software that makes it safe for your wife to buy things on Amazon.’

‘OOHH,’ they’ll probably say.  Believe me, an intrigued ‘OOOHH’ is a lot better than a confused ‘Huh?!’ or a disinterested ‘oh.’

All this in 60 seconds and all because you stopped TELLING people what you do and started ASKING how they may have experienced what you do.”

He actually got a little misty-eyed. I asked him, “What’s going on?”

He told me, “I can’t wait to get home after this conference.”

” I can finally get across to my eight year old son what I do in a way he understands it.”

How about you?  What do you say when asked, “What do you do?” What do your co-workers say?  Do your responses cause confusion or create connections?

You might want to turn your next staff meeting into a brainstorming session where everyone crafts two-way introductions that genuinely engage people in mutually-relevant conversations that are a win for all involved.

By the way, this is just one of 25 ways to create more mutually-meaningful communications featured in my new book Got Your Attention? How to Create Intrigue and Connect with Anyone.  You might want to check it out and discover for yourself why it’s been endorsed by Dan Pink, Keith Ferrazzi, Miki Agrawal and Marshall Goldsmith who says it’s a “must for every leader.”

Do you have a book you’ve been working on for what seems like forever?

Do you keep promising yourself you’ll write more blogs… someday?

Do you wish you had support so you weren’t going it alone?

If you said “YES” to any of those questions, you’ll love our Stop Wishing – Start Writing Community.
tell me more