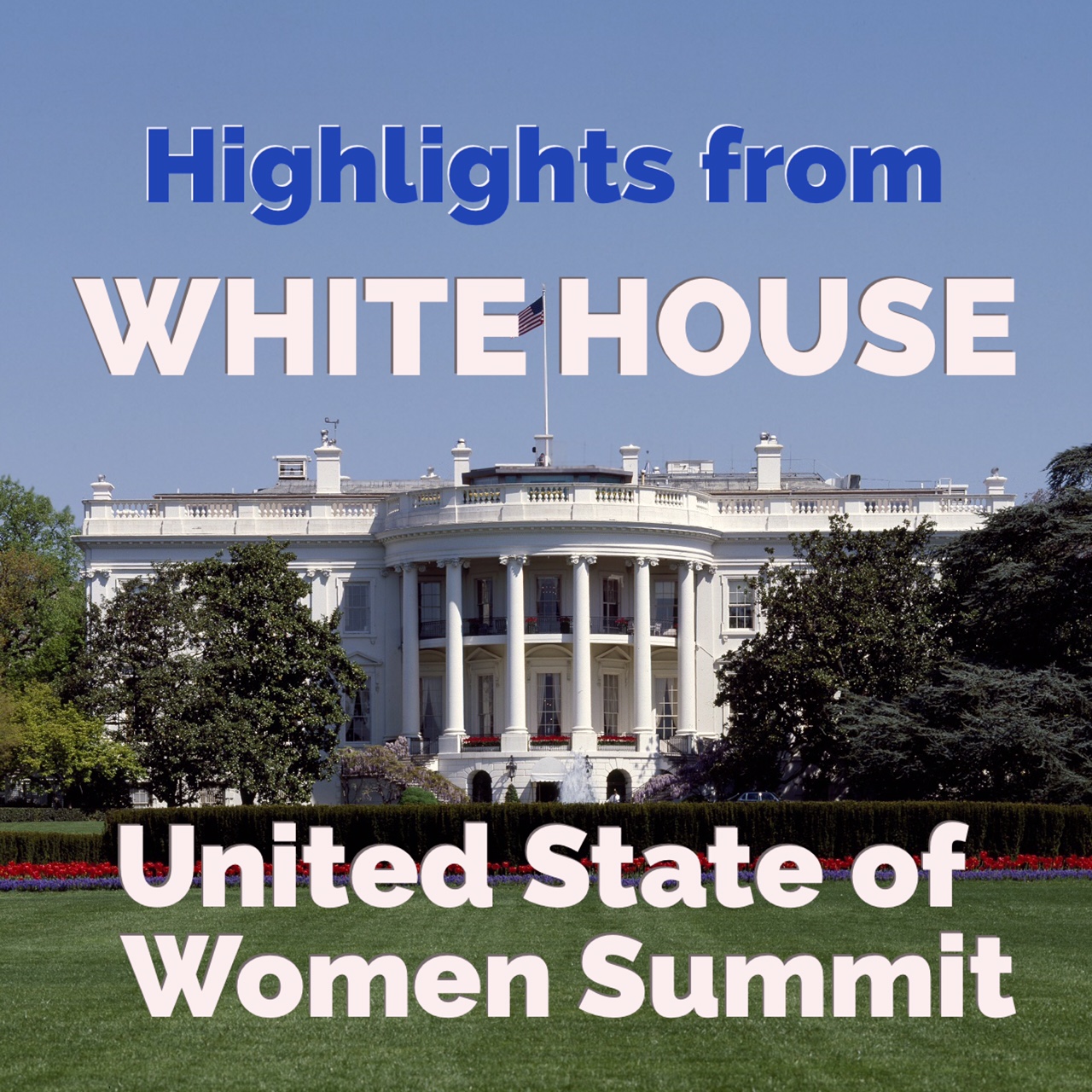 What a joy it was being immersed in a sea of 5000 women at The White House The United State of Women Summit.

Everywhere you looked, there were women swapping cards, sharing resources and recommendations, and discussing how their startup, company or cause is educating and elevating women.

What I loved most was how the vast majority of speakers role-modeled the essence of entrepreneurialism. They saw a problem, opportunity or need and thought, “Somebody should DO something about this.”

Then they realized, “I’m as much a somebody as anybody, I’ll do something about it.” For example, 11-year-old (you got that right) 11-year-old Mikaila Ulmer was stung twice by bees in the same week when she was 4.

She said, ‘First I got angry, then I got curious.” (What a wonderful sequence of responses).

She decided to do some research and discovered the important role bees play in our ecosystem but they’re endangered, so (like you do) she created her own BeeSweet Lemonade line that is now at Whole Foods.

Perhaps you saw Mikaila on Shark Tank when she rocked the judges and received $60,000 in funding. This young woman captured the attention and respect of everyone in the room as she discussed cash flow, how she donates part of her profits to protect bees, and how her little brother is her #1 sales rep.

And who did they ask to introduce The President of the United States? None other than the uber-confident Mikaila.

Barack Obama was as impressed with Mikaila as everyone else. He started his speech by saying, “When Mikaila was asked backstage if she was nervous about speaking in front of 5000 people, she said, ‘Oh no, I spoke in front of 11,000 people last week.’”

Then, Sophia Bush interviewed 11-year-old Marley Dias about what motivated her to start ‪#‎1000BlackGirlBooks‬.

Marley said, “We all need a hero who looks like us, but I couldn’t find any books that featured young black girls as heroes. I finally discovered ‘Brown Girl Dreaming’ by Jacqueline Woodson. It made such a difference for me, I wanted to give other girls the opportunity to read it.”

Check out this fascinating ‪#‎NPR‬ interview with Marley.

I could go on all day with highlights; however, we’ve all got work to do so here are just a few more.

At the Entrepreneurship Summit co-sponsored by the U.S. Small Business Administration the day before, Amy Millman of Springboard Enterprises coined the sound-bite of the day.

When her panel was asked for best-practices on how to approach investors/venture capitalists to raise funding, Amy said three succinct words … “ADD A ZERO.”

Now that’s how to say a lot in a little.

Instead of taking hundreds (thousands?) of words to explain that many startup founders are too timid and conservative when making their ask, and how important it is for them to “think bigger and be bolder” … she turned what could have been ‪#‎INFObesity‬ into a repeatable, retweetable sound-bite.

I was particular impressed with the White House Chief Technology Officer Megan Smith. She showed a slide of the United Nations Sustainable Development Goals and then promptly gave example after inspiring example of how female makers, hackers, and techies are addressing and solving those issues.

For example, she showed a 10th grader teaching the New Orleans Police Chief how to code, lauded the 11,000 participants from around the world at the Grace Hopper Conference, and championed “Take Your Kids to the Lab Day.”

In conclusion, she quoted Gloria Steinem as saying, “Women have always been part of the past, but they haven’t been part of our history.”

Megan’s on a mission to tell the stories of how women have, and are, playing a crucial role in America’s progress so they get the credit and recognition they deserve.

That theme was picked up by President Obama in his stirring address in which he first poked fun at himself, noting he had “a few more” gray hairs than when he took office, but “This is what a feminist looks like.”

He then launched into his trademark blend of what I call ORASTORY – a combination of crafted rhythmic words delivered in a rising cadence that elicited a ROAR from the room.

He said, “Our country is not just all about the Benjamins—it’s about the Tubmans, too. We need all our young people to know that Clara Barton and Lucretia Mott and Sojourner Truth and Eleanor Roosevelt and Dorothy Height aren’t just names for Women’s History Month, they are authors of our history, architects of our destiny.”

Oprah interviewed First Lady Michelle Obama and it was obvious how much the two of each other enjoy, respect and admire each other.  They were so relaxed and natural with each other, they might as well have been sitting on a couch in their living room “talking story.” When asked her biggest lessons learned, Michelle said, “The importance of protecting my time.” Within the first week of moving into the White House, she was overwhelmed with demands and obligations, and she realized that if she wasn’t clear about her priorities (her daughters being her #1 priority) that she would get swallowed up in the job.

Oprah commented on how “brave” she was and Michelle said, “You don’t have to be brave if you know what your values are.”

Shifting gears …. when asked when he was going to retire, Warren Buffet said, “Why would I? At 85, I tap dance to work because I get to do what I love with people I love. “  (I hope to make it to 85 .. and when I do that’s exactly how I feel about the work I get to do:-)

Along with millions of other women athletes, I will always be grateful to Billie Jean King for her pioneering role in getting Title IX passed.

As I tell my sons, when it was time for me to go to college, there were NO athletic scholarships for women. Now, thanks to Billie and the many other committed women of the Women’s Sports Foundation who fought for equity in sports, there are 30,000 given to women every year. As to what catalyzed her to tackle this issue, she said, “I had an epiphany when I was 12 years old. My opponent and I were both wearing white clothes, playing with white balls, and everyone around me was white. I thought, “WHERE IS EVERYBODY ELSE?”

Billie decided then and there, (yes at 12 years old), that sports should be equal access, equal opportunity and she was going to use tennis as a platform to make that happen globally. Talk about a visionary whose dedication and perseverance has benefitted millions.

She and Shonda Rhimes (the creative genius behind ABC Thursday night’s blockbusters Grey’s Anatomy, Scandal and How to Get Away with Murder) were asked: “How do you handle the haters?”

Shonda echoed what everyone else (including First Lady Michelle Obama and Oprah) said, “I ignore them.”

Billie went on to explain, “I learned how important it was to do this from my dad. When I was 14, I lost an important match 6-0 6-0 and it was splashed all over the front page of the sports section.

I was really upset until my dad asked me, ‘When did that happen?’ I looked at him and said, ‘Yesterday.’

‘Exactly,’ he said, which was his way of reminding me that paying attention to something I can’t do anything about is a waste of time.”

There is so much more, for example, Julie Hanna’s (Executive Chair of the Board of KIVA) brilliant insights, “Pity is the enemy of compassion” and “Funding entrepreneurs is the ally of empowerment” and her mission to fund a billion deserving small business owners.

There were more galvanizing insights from this event, however, I need to practice what I teach and not overstay my welcome by going on too long …

…so, I’ll wrap up with Lilly Tomlin’s tongue-in-cheek observation, “Remember, we’re all in this … alone.”

Thanks to inspiring “rising tide raising all hopes” gatherings like these, we don’t have to go it alone; we can go it together.

And when we do, we turn struggles into strength and scale our impact – for good.

P.S.  If you’d like a preview of Sam’s popular keynote on Women’s Leadership, check out this post on “Don’t Like What’s Being Said?  Change the Conversation.”