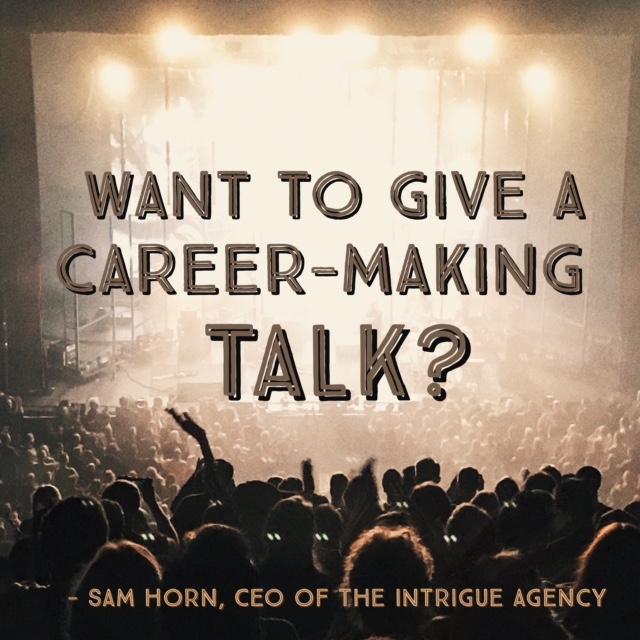 Do you have an opportunity to speak at TED, TEDx, SXSW, Small Business Expo, 99U, WBENC, Dreamforce, NMX, World Domination Summit, Wisdom2.0 or BIF?

If so, you already know that a quality 10-18 minute talk can be a career-maker.

If you have an opportunity to get up in front of a group of people, please understand that EVERYONE in the room (and watching the video later) is a decision-maker. Every single person has the power to take you and what you care about viral. Each person has the power to quote you, post about you, promote you, fund you or work with you.

Invest in your future. Use these “7 Cs of Original Messaging” to create a genuinely intriguing, one-of-a-kind talk that favorably impresses/influences everyone in the room and in the online audience in the years ahead.

A Hollywood producer once told me directors can predict when their movies will make money. How? Simple. Do people walk out of the theater repeating something they heard word for word? If so, they become word-of-mouth advertisers. When people ask, “Seen any good movies lately?” they’re talking about your movie and taking it viral.

The same applies to your talk. Can listeners repeat your big idea – your most important point – word for word? If they can, they’ll become your word-of-mouth advocates. If they can’t, your big idea will be out-of-sight, out-of-mind … in one ear, out the other.

Neil Gaiman’s 2012 commencement speech for Philadelphia’s University for the Arts shows the payoff of distilling your big idea into a crystal-clear sound bite. “Make Good Art” resonated so powerfully with the initial audience of hundreds, the video went viral within days and was turned into a best-selling book.

No perfunctory opening. No, “I’m glad to be here today and want to thank the organizer for inviting me.” That’s predictable, and predictable is boring. Pleasantly surprise everyone by jumping right into your origin story or into a compelling, counter-intuitive insight that flies in the face of current beliefs.

Test your premise beforehand with colleagues. If they say, “I already know that,” it’s back to the drawing board. Or, as comedian George Carlin said, “What did we go back to before there were drawing boards?” Keep tweaking your idea until people’s eyebrows go up (a sure sign of curiosity) and they say, “Hmmm. That’s interesting. Tell me more.”

The keynote speaker at a recent conference used the often-referenced “Pygmalion in the Classroom” study of how teachers’ expectations affect student performance as the basis for her talk. Really?! That study was done in 1989! She couldn’t find any current studies to make her case? Referencing such an outdated source undermined her credibility.

Recency = relevancy. What just-released report can you reference to prove your point? Recent research will get their attention, and respect.

After you’ve come up with a big idea, run it by your gut. Ask yourself, “Is this congruent with my voice, my vision, my values? If the program coordinator suggests a topic, but it doesn’t feel right, it’s wrong for you. A career-making talk shares your EEE – Expertise, Experience, Epiphanies – not someone else’s. What do you passionately believe? What is a heartfelt legacy message that sums up what you’ve learned from life? What’s an exciting invention, innovation or breakthrough you’ve been part of?

An executive called me a week before his program and said, “I hope you can help. I’ve been traveling almost nonstop, so I asked our company speechwriter to help prepare my talk. It’s well-done, it just doesn’t sound like me.”

I told him, “You’re right. A career-making talk has got to be your voice. Get a recorder and ask someone to take notes while you read the script. Every time you read something and think, ‘I would never say it that way,’ say out loud how you would say it. Don’t censure or second-guess yourself, don’t try to be eloquent, and don’t overthink it. Just keep moving forward, rewording it into your natural voice. Ask your assistant to integrate your phrasing into a new version and then read it out loud again until you wouldn’t change a word. Now, it’s your talk.”

The purpose of a talk at most venues is not to sell your products or services, and it shouldn’t be your priority. Unless this is a pitch forum where you are supposed to be marketing yourself and your company, the point is to ADD VALUE FOR THE AUDIENCE not to promote yourself, your products and services. The fact is, though, an excellent talk will scale your visibility, viability and drive business to and for you.

Witness what’s happened to Brené Brown. Brené was a professor when she spoke for TEDx-Houston. She was popular at her university, but hardly a household name. Her talk on vulnerability was so evocative, it was quickly uploaded to the TED.com site and has since received 29 million views. Her resulting Oprah appearances made her an international fan favorite, generating lucrative book deals and five-figure keynotes.

It’s important that your talk be consistent with your brand positioning and primary focus. Instead of summarizing what you’ve done in the past, a career-making talk is a pebble in the pond of your best future. Ask yourself, “What do I want my next 1-3 years of my life to look like? How could this talk catalyze that and set that up?”

For example, a colleague was asked to give a TEDx talk about bullying since she’d had a horrific experience being bullied at work. She feels strongly about this issue, and has a lot to say about the importance of speaking up instead of waiting for HR to rescue you (not going to happen). But she is a management consultant. She doesn’t want to keep reliving that negative experience by speaking, consulting, and doing media interviews on it. It wouldn’t serve her goals to drive demand that’s inconsistent with her priorities and the quality of life she seeks. It’s smarter to select an idea that’s in alignment with what she wants to accomplish the next few years.

I had an opportunity to hear the Physics Nobel Laureate Dr. John Mather speak recently. Following his talk, I asked him, “What’s your next “big idea?” He said, “I’ve got one, but I’m researching to see if anyone else has gotten there first.”

Exactly. Jerry Garcia of the Grateful Dead said, “It’s not enough to be the best at what you do; you must be perceived to be the only one who does what you do.” Once you have a clear, compelling, current, consistent, congruent, commercially viable idea, Google it to see if anyone else has gotten there first. If they have, it doesn’t necessarily mean you should abandon the idea; it just means you should design a provocative premise around it that hasn’t been shared before.

For example, watch Sir Ken Robinson, the most-watched TED talk of all time. Certainly, other experts have talked about the need for creativity in our schools, but no one does it quite like Ken.

Does your career-making talk meet all seven C criteria of Original Messaging? If so, kudos to you. You’ve dramatically increased the likelihood your talk will be a success for you, the meeting planner, and everyone who watches in person and online.

If not, invest the effort to craft an original 7C talk that gets and keeps people’s eyebrows up. Your audience, career, and legacy will thank you.

Sam Horn, Founder/CEO of the Intrigue Agency, is on a mission to help people create quality projects that add value for all involved. Her TEDx talk on INTRIGUE and books – including POP!, IDEApreneur, Tongue Fu! and Washington Post bestseller Got Your Attention? – have been featured in New York Times, Forbes, Inc, Fast Company and on NPR and MSNBC, and presented to Boeing, Intel, Cisco, NASA, Capital One, NASA, YPO, National Geographic.